FIRST PERSON and THE FUNDAMENTAL QUESTIONS

First Person is a new multichannel audio piece where over 75 participants were invited to record themselves reading from the book The Fundamental Questions which Vicki Bennett co-authored with Gregor Weichbrodt, where thousands of user profiles from the web were parsed and matched according to four existential questions in life. The result is a chorus of people looking beyond themselves for their perfect mirror, calling from thousands of isolated portals, bonded by their almost identical searches, questions and intentions creating an aura of interconnectivity. The invited readers individually read from the same point in the book, starting "I am an artist..." for around 10 minutes each, sent the recordings to Vicki who collaged them into a symphony of voices.  Vicki then gave the stereo recording to Jon Leidecker (aka Wobbly) to spatialise for 6 channels, which features in the gallery exhibition.

To coincide with the exhibition First Person, Fourth Wall at Hallwalls Contemporary Arts Center is a new second edition of this book. The hard copy is available exclusively in house at Hallwalls. Here is the digital version.

Vicki Bennett has also made a new surround work First Person for the exhibition, The stereo version is available to hear below: 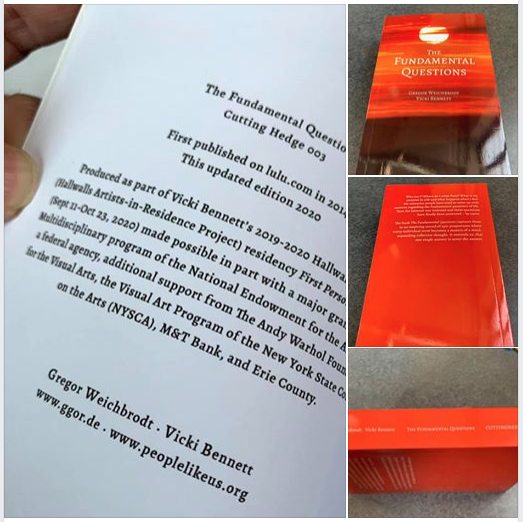 EARLIER REFERENCES, READINGS AND INTERACTIONS WITH THE BOOK


People Like Us guested on BBC Radio 3’s The Verb on Friday 8 December 2017 talking about scrolling culture (and google minds!) in relation to the creative process and The Fundamental Questions book, playing a specially made 3 minute group reading.

The Fundamental Questions at Xing The Line (2014), The Apple Tree, Clerkenwell, London

“I am the gambling of the fraudulent; I am the splendour of the splendid; I am victory; I am determination; I am the goodness of the good. I am a huge animal lover and love to spend time with my chinchilla and 2 pet rats.” – from the excellent piece of mashed-up uncreative writing called “The Fundamental Questions.” From Vicki Bennett and Gregor Weichbrodt. Further confirmation that the best use of appropriation in art is with a healthy dose of humor and joy. [And it comes in a paperback, almost the same size as your pink, half-read copy of Zen and the Art of Motorcycle Maintenance.] — Kevin Hamilton 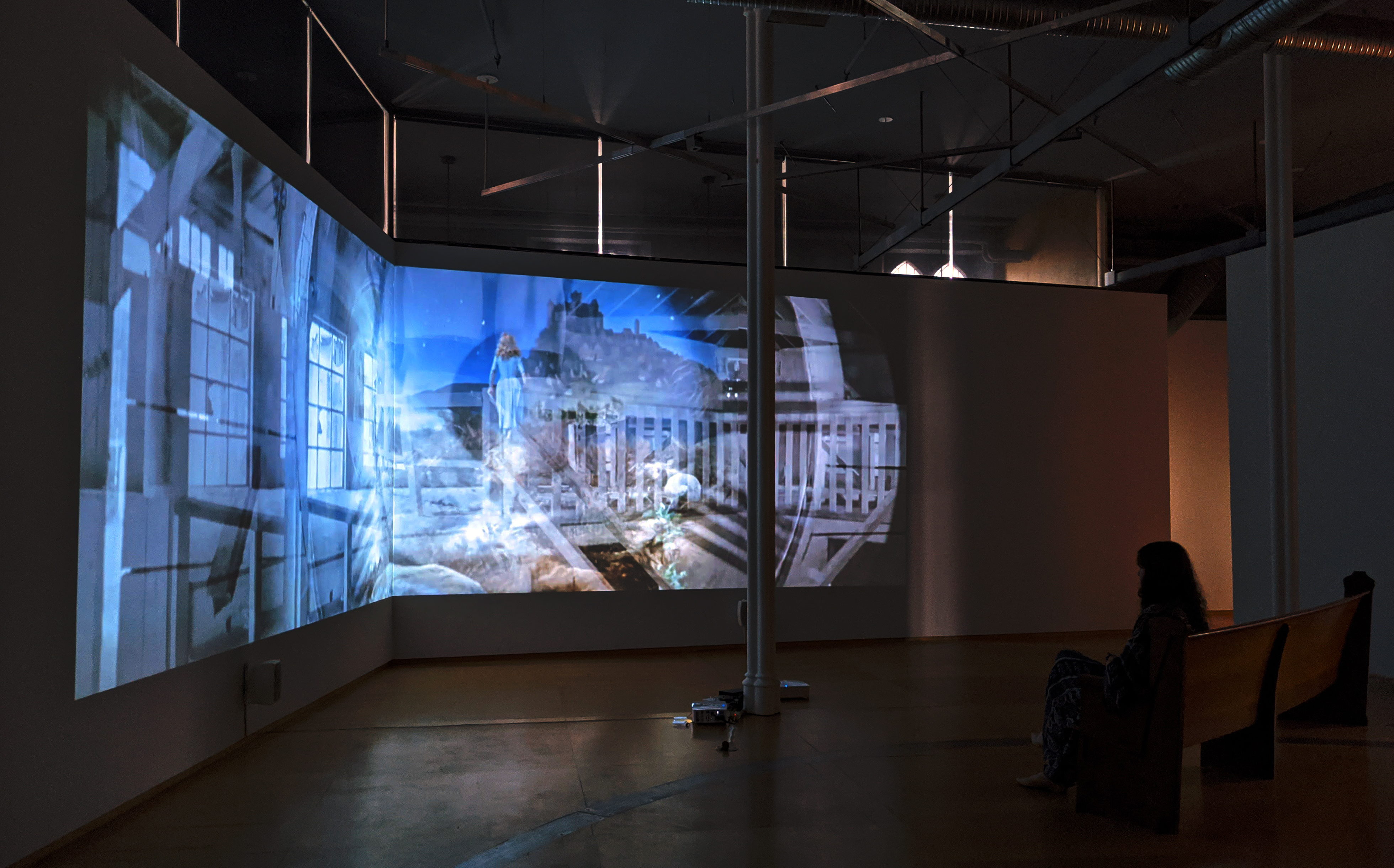 Fourth Wall (2020, 15'11"), a new site specific wide screen movie, reflects upon the illusion of separateness. The title addresses the experience of illusory duality constructed by the mind, which is replicated through the lens of the camera, the stage, and the surface of the page, movie or computer screen.  Through the viewing, cutting and editing of hundreds of pre-existing movies, Vicki searches for multiple and parallel narratives and collages these together to create a flowing stream of consciousness, attempting to breakdown this wall and reveal what she perceives as a greater reality and oneness beyond relativity.  Availlable to view in the gallery for the entirety of the exhibition, short excerpt below, click bottom right to expand the size.

I watched (finally) First Person, Fourth Wall tonight, twice. Loved it! I had an experience watching it that you described somewhere, in some interview I read recently. When first watching, my mind naturally is trying to 'make sense' of what I'm seeing, put it in some kind of order, 'understand' what's happening, view it linearly, rationally, even though it's obviously not linear. Then at some point, my mind just gives that up and starts going with the flow, so it really is a meditative experience, or similar to mediation. And of course there are moments when some clip I can identify surfaces for a moment, and then back to the flow. There are so many motifs -- eyes, lenses, irises, circles, hallways, stairways. I don't think I'd ever thought about (even though it's kind of obvious) how many films use architecture and even nature settings as a stage framed by a kind of proscenium arch, which you amplify. I also love the pixilation effects and some other effects I don't remember seeing in your work before. Just really stunning. Must be great on a big screen. -- Charlie Lewis

The 1 October 2020 edition of The Wire's weekly show on Resonance FM included a special guest mix by Vicki Bennett, previewing a number of the micro-commissions for this project. Full playlist here, on The Wire's website.

Explosions and mirrors. An onslaught of clocks. The omniscient eye. Flashlights searching across the frame, for what we’ll never know. Portals, opening doors, and endless passageways that lead to unknown realms. These are some of the reoccurring symbols that audio/visual artist Vicki Bennett uses to immerse us in the world that is Fourth Wall, her latest multi-channel video produced through Hallwalls Artist-in-Residence Program (HARP).

The term “fourth wall” is a convention of the theater and cinema, a spatial relationship between the actor and the audience in which the actor ignores the audience, and the audience enacts a willing suspension of disbelief. Unless that contract is broken—a violation of this separation between audience and actor, as seen when an actor addresses the audience. This very construct, however, exemplifies the duality that Bennett seeks to reveal: the either/or systems and beliefs that hinder our awareness that the world is interconnected and that everything is relative. “There is no fixed point between you and everything else around you, inner and outer and so on,” she writes. “I don’t think the fourth wall breaks, I just think it shows itself up to be more like water than ice.” Bennett’s video challenges this duality through a stream of consciousness, with an audio collage that remixes the film soundtracks.

In an age of digital reproduction, the artist who is commonly known as People Like Us, considers her work as following in the tradition of folk art, with the byproducts of the mass media functioning as a type of palette.  Mining materials from popular culture, Bennett’s working method favors process over product, leaving her untethered to any preconceived structures. Countless hours are spent researching films, including those recommended by friends through social media and online forums. As the clips are intuitively arranged, various themes and cinematic tropes begin to emerge. A type of recombinant montage, Bennett collages these elements through juxtaposition and superimposition. Although some might consider this content as being derived from an “original” source, the idea of originality becomes inconsequential. Encountering Bennett’s work is a wholly unique cinematic experience. The audience is taken on a journey that the artist is on too, with fantastic synchronicities discovered upon each viewing by the audience and the maker. “You can never write that story,” she says. “To me that’s what makes it magical. It’s between texts and its what’s in the margins. It’s what’s in the blank pages of a book you could never write.”

Audiences are often eager to identify the cinematic references in Bennett’s work. The material, gleaned from Hollywood films, is either immediately familiar or rests on the edge of one’s memory. One is at once barraged by layers of clips, from all genres, that occur simultaneously within the frame. But after reaching a certain threshold, audiences let go and begin to watch the work on its own terms. Bennett lets the viewers’ unconscious “break free” from preconception. It’s a bit like a loop or a drone, Bennett says. “You’ve got this mantra of constant variations … by the tenth minute point it’s like doing meditation. It’s a transcendent moment where you give up and then just are with it.”

Fourth Wall can be seen as an experiment in meditation that is not unlike Bennett’s audio collage First Person, also a HARP project. With this work she has created a multichannel sound scape using excerpts from the 2014 book The Fundamental Questions, co-authored by Gregor Weichbrodt. The 569-page text was constructed using the internet as both a guide and source material. Weichbrodt created a computer program that searched dating sites for answers to various statements like “I am…” Though their declarations appear unique, the responses point to universal themes. As Bennett and Weichbrodt processed these statements, culled from websites like OkCupid, certain existential questions began to emerge: Who am I? Where do I come from? What is my purpose in life? What happens when I die? These questions, and the answers found in the personal statements gathered in the book defy the illusion of the separateness, shifting from the individual and giving way to the collective. In First Person, Bennett has arranged a chorus of 75 unique voices, each of whom reads statements from the book, such as those that begin with “I am an artist…” Despite the difference of their answers, these voices ultimately sing together, repeating the same words over and over. A poetic soundscape that illustrates Bennett’s astute work as a sound collagist, these testimonials reveal interconnectedness as each declaration becomes layered and repeated, both synchronized and asynchronous.

In addition to these two stand-alone works—and a virtual retrospective of videos from her 30-year career—Bennett, who is a longtime DJ at WFMU (her freeform radio show DO or DIY has been on the air since 2003) has curated a series of micro-commissions that will be archived on the station’s website. She asked a group of collaborators across the field of visual, audio and textual art to respond to the themes of first person/fourth wall. These artists include Dina Kelberman, Buttress O’Kneel, Mark Hurst, Scott Williams, Irene Moon, Jasmin Blasco, Matmos, id m theft able, Sheila B, Ergo Phizmiz, Yon Visell, Porest, David Shea, Gregor Weichbrodt, Carlo Patrão, Tim Maloney, Gwilly Edmondez, Jon Leidecker (aka Wobbly), People Like Us, Peter Jaeger, Ranjit Bhatnagar, Adriene Lilly, Micah Moses, Andrew Sharpley, Andie Brown, John Kilduff (Let’s Paint TV) and Hearty White. Their responses range from videos, audio works, to music radio shows. Taken alone, these works for the HARP residency can be seen simply as a continued progression of Bennett’s work.  But together, with her streaming catalog, they form a type of relative constellation—a collection of stars that serves as a reminder that we are made up of what we see in the night sky, and conversely, these images, sounds, ideas collaged together are people, like us. 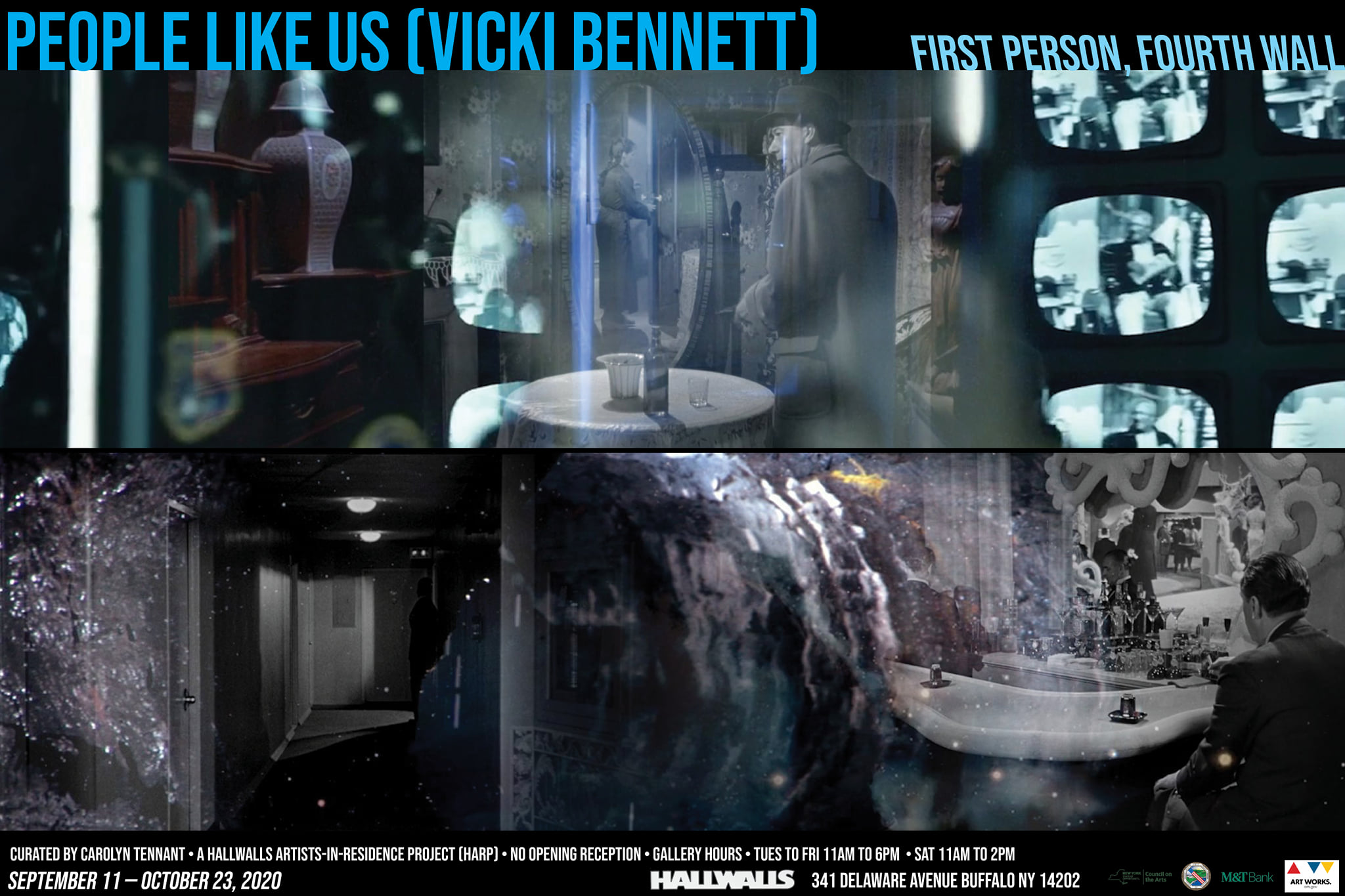