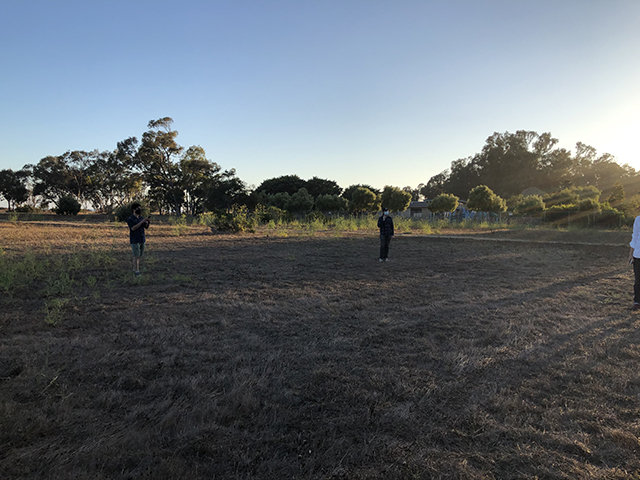 You take part in a walking procession, in observance of present circumstances and their effects, by recording and listening to the sounds of the world.

You arrive at the site together with the gathered participants. Together, you walk 400 steps while each recording the sounds in the surroundings using handheld recorders. The walk starts and ends with bell sounds that will allow all recordings to be
synchronized and mixed.

Together, you form a circle centered on the bell, large enough to allow uniform spacing between everyone. The event commences with a ringing of the bell. You then walk single file together, following the bell ringer. Each 20 steps are marked with a percussion sound. You maintain equal spacing while walking. You step in synchrony with the group. After 400 steps, you return to the position on the circle where you began.

The end is marked by a ringing of the bell.

Yon Visell is a transdisciplinary academic researcher working in haptics, acoustics, robotics, and interactive technologies.  He directs the RE Touch Laboratory at the University of California Santa Barbara, where he is Associate Professor in the Media Arts & Technology Graduate Program, Department of Electrical and Computer Engineering, and Department of Mechanical Engineering. Trained in engineering and physics, he received the PhD in Electrical and Computer Engineering from McGill University while working on haptics and VR technologies. He was later a postdoctoral researcher working on haptics at Sorbonne University in Paris, France. He received MA and BA degrees in Physics from the University of Texas at Austin and Wesleyan University respectively. He has published more than 75 scientific works, and has edited and co-authored two books on VR, including "Human Walking in Virtual Environments".  Visell's work has received several awards at prominent academic conferences. He received the US National Science Foundation CAREER Award (2018), a Hellman Family Foundation Faculty Fellowship (2017), and a Google Faculty Research Award (2016). He previously spent several years in industry working at technology companies, including Ableton, where he developed signal processing software from 2001 to 2003. Prior to that, he worked on speech recognition algorithms at Vocal Point (part of Nuance, after acquisitions).  Dr. Visell worked in interactive art, design, and robotics research at the University of the Arts Zurich, at FoAM, Belgium, at the Interaction Design Institute Ivrea, and at an art-technology organization, Zero Th, that he co-founded. His performance and exhibitions have been presented at  Ircam Centre Pompidou (Paris, France), Siggraph, Phaeno Science Center (Wolfsburg), La Gaité Lyrique (Paris), the Oboro Center (Montreal), the Biennale of Design St. Etienne (France), Red Light District (NY), INC 2014 (Miami), SBCAST (Santa Barbara), among others. Visell produces and hosts a weekly radio program, The Unknown Territories, together with Irene Moon.  The show highlights contemporary science and adventurous music.