Lullabies and reveilles. Something for the late nighters and early risers. 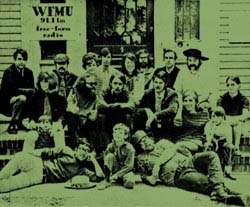 We unlock the FMU archive vault and take a trip back to August 29, 1969 and re-air a portion of Kevin Taylor and Danny Fields' farewell broadcasts before the infamous staff walkout. Ken Freedman sets the stage ...

"There was growing tension between FMU and Upsala College from September 1968 to August 1969 due to the college's correct perception that their sleepy little radio station had been taken over during summer 1968 by freaks and weirdos. Throughout academic year 1968-1969, tensions grew and during the summer of 1969, the staff was burned out and realized that the jig would be up with the new school year in Sept 1969. The school was going to reassert control. Also, the staff felt that the Woodstock Festival was the ultimate sellout of the counterculture. So, as John Lennon sang a few months later, they felt that "The Dream Was Over." So the staff all walked out en masse in August 1969."