This week: Carl Miller, author, "The Death of the Gods: The New Global Power Grab." 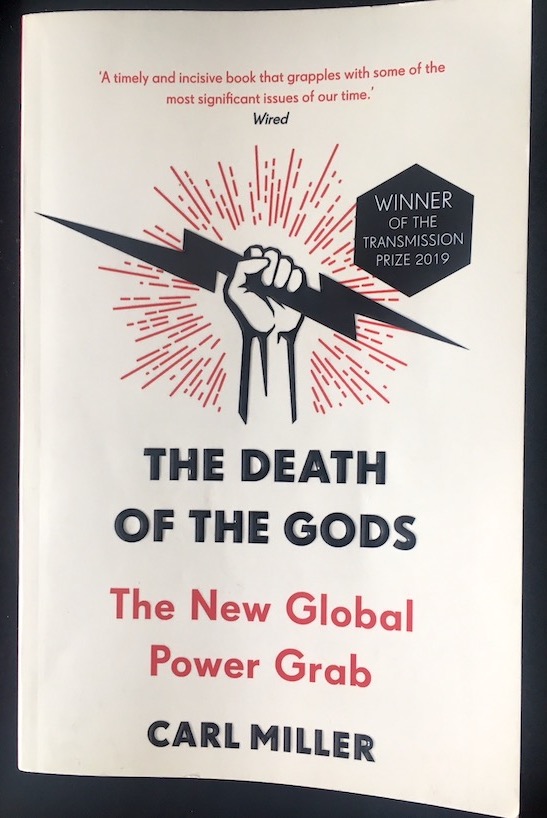 • The Death of the Gods: The New Global Power Grab (book)

• Big Tech’s ‘Innovations’ That Aren’t (WSJ Op-Ed by Senator Josh Hawley, Aug 28): "What passes for innovation by Big Tech today isn’t fundamentally new products or new services, but ever more sophisticated exploitation of people... the dominant platforms employ behavioral scientists to develop interface designs that keep users online as much as possible. Big Tech calls it 'engagement.' Another word would be addiction."

• The People of Hong Kong Will Not Be Cowed by China (NYT Op-Ed by Joshua Wong and Alex Chow, Aug 31): "Hong Kong’s summerlong protests [have] come to represent the spirit unleashed by hundreds of thousands of protesters. As many commentators have pointed out, the massive, leaderless resistance movement here is a critical front-line battle against the authoritarian Chinese Communist Party in Beijing. A dictatorial party facing domestic and global pressures — especially from the ongoing trade negotiations with the United States — the C.C.P. is getting impatient, apparently. On Friday, it targeted leading activists and politicians in Hong Kong with a round of arrests, possibly signaling that a broader crackdown may be around the corner."

• As leaders gather for Sunday’s anniversary in Poland, nationalists are exploiting the events of 1939 (The Guardian, Aug 30): "Ten years ago, Putin used his speech at Westerplatte to say the [Molotov-Ribbentrop] pact was “from a moral point of view unacceptable and from a practical point of view pointless, harmful and dangerous”. He did not apologise, but called the agreement a 'mistake.' This year, the rhetoric from Moscow has been very different, as the foreign ministry launched an online campaign with slick animations and a #TruthaboutWWII Twitter hashtag. The culture minister, Vladimir Medinsky, wrote a column calling the pact 'a triumph of Soviet diplomacy'."


<-- Previous playlist | Back to Techtonic with Mark Hurst playlists | Next playlist -->