The program formerly known as The Fuzzy Glove Hour, Whores, and The Happiness Hut. Ken and Andy, also known as The Enema Boys, further lower WFMU's already abysmal standards on a weekly basis. Stunt radio which subjects the radio audience to concepts and topics which mature adults should not have to endure. Find the fatal flaw. (Visit homepage.)

March 8, 2017: Soak Andy! Soak Him for All He is Worth! Pledge Here
Ahh, the annual Soaking of the Breckman, a tradition handed down across the generations from the ancient Israelites.

Tonight's show is the first show of the annual fundraising marathon, and every person calling to pledge got the punchline to the joke "What is the difference between WFMU and the Hindenburg disaster?"

A pair of pillowcases are available for a pledge of $75 or more; Ken and Andy each designing a pillowcase. Andy has already designed his - a pillowcase with a game on it, "Name That Stain".

The annual 4-minute "Soak Andy" festival takes place, in which Andy must match all pledges made. The lines light up to soak Andy - even the Breckman family gets in on the fun. After the soaking period, for every $500 pledged, Ken and Andy take turns revealing a digit of their phone number. The number releasing starts off at a rapid pace, making Andy very uncomfortable. By the time each member has revealed 4 digits, Andy is in full panic mode. He pleads to buy out of the phone number game, but Ken won’t allow it. By the end of the show, both phone numbers are nearly revealed!

Also, throughout the show, Ken tries hard to expose Andy as a "rich dude" with a gold plated $200,000 porch, but Andy flatly denies this. And Andy notes that he bought his wife a pink hat, and also enjoys female mud wrestling, both of which prove that he is a feminist. 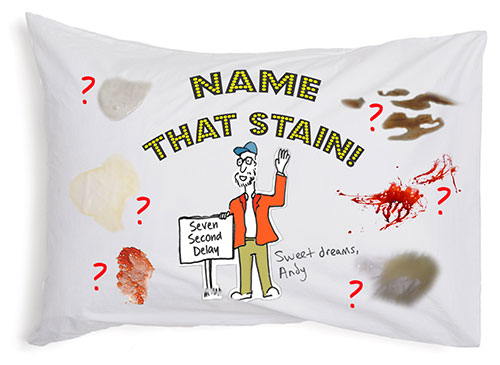 Pictured above: Andy's pillowcase, part of the set of Seven Second Delay pillowcases that goes to anybody pledging $75 or more.

Plus, every person pledging $20 or more on the phone gets the punchline to this joke:

What's the difference between WFMU and the Hindenburg disaster?

After the soaking, we will reveal a digit of Andy's personal celphone for every additional $1000 raised.

RSS feeds for Dinner at Andy’s with Ken and Andy:

| E-mail Ken,E-mail Andy | Other WFMU Playlists | All artists played by Dinner at Andy’s with Ken and Andy | Listen on the Internet | Contact Us | Music & Programs | WFMU Home Page | Support Us | FAQ