Live from the Golden Festival! 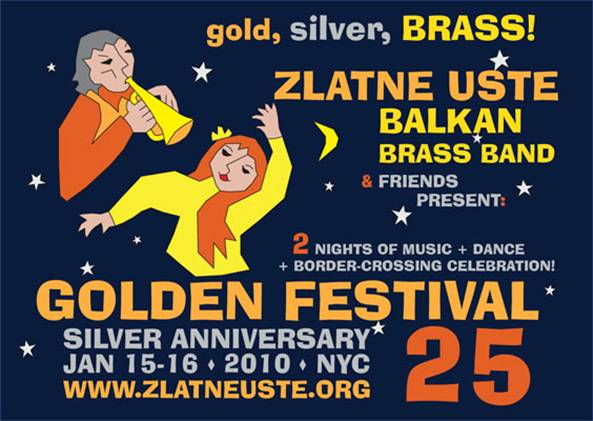 This evening, with the help of co-host / tech guru Irene Trudel and our peerless crew, we broadcast all the music from the Golden Festival of East European Music and Dance Kafana stage from 6pm until midnight. (Kafana is Serbo-Croatian for "cafe"; the stage is located conveniently near the food!) We went an extra three hours (with thanks to Daniel Blumin).

About the Festival: Every January, NY Balkan music scene pioneers the Zlatne Uste Balkan Brass Band organize the Golden Festival - a massive two-night grassroots Balkan and East European music and dance festival at the Good Shepherd School, 620 Isham Street (near Broadway and 207 St.) in upper Manhattan. The festival, celebrating its 25th anniversary this year, is the biggest event of its kind in New York City: The second night (Saturday) is a marathon featuring 40-50 bands and artists performing on three stages from 6pm until 4 in the morning. See: http://www.goldenfest.zlatneuste.org/

Post-Mortem note from Your DJ Rob W: Sorry everyone about the drop-out problems we had during the live transmission of this remote. We'll make sure that doesn't happen if we do it again next year. The good news is, we've created the archive from our on-site recording (extra thanks to Doron and Irene) - so it's totally clean, free of drop-outs and glitches.

These are the sets that will be included in the WFMU broadcast from the festival's Kafana stage. For the full three-stage 6 pm to 4 am festival lineup and schedule see: http://www.zlatneuste.org/GFsched10.htm.

The Rosen Sisters: A mix of line dances and couple dances

Zlatne Uste Balkan Brass Band: Dance music from Serbia and the Balkans from the four-time invited guests to the renowned Guca Trumpet Festival in Serbia

/ Live from the 2010 Golden Festival
11:50 pm set. (Broadcast portion will probably end with set in progress.)